AS SEEN ON TV AND IN NEWSPAPERS The Australian, Sun Herald & Age

As seen on TV; Channel 10 TV NEWS asked Nicole Kofkin at Smartaupairs about the ‘au pair boom’ in Australia

READY TO TACKLE YOUR CHILDCARE CHALLENGE? START HERE WITH OUR SIMPLE FORM

She says the extra pair of hands around the house has been a godsend, particularly as they have no family in Australia. THey get into the routine, they know the kids friends and they know you and how you work as a family; six months isn’t really long enough.

Juliette MacGregor, acting Manager of Smartaupairs, said laws were restricting the ability of agencies to bring students and denying consistency to children and families.

The Sun Herald newspaper featured a very informative article about the shortage of au pairs and the need for an au pair visa in Australia. We recommend that host families start interviewing 3-6 months in advance and many of our regular family are already interviewing now for their au pair to start in July/August!

To counter the seasonal shortage of au pairs, the industry is lobbying the federal government to introduce a specific au pair working holiday visa, so au pairs can stay with the one family for 12 months instead of the present six-month limit. Australian demand for au pairs has doubled in the past three years, agencies said, as families realise they are a more flexible form of childcare than long-day care or after-school care, and far cheaper to employ than nannies.

Nicole Kofkin from Smartaupairs was interviewed by David Oldfield for 2UE radio; he was amazed how affordable an au pair is for an Australian family!

Featured in other newspapers

Nicole Kofkin worked fulltime for almost 20 years, primarily in the marketing area of the travel industry in the UK. She loved her work-from-home days but in order to step up to the next level, including managing a team, she was told she had to be in the office every day, which would have meant gruelling commuting and a 60-hour week.

Nicole Kofkin set up a Sydney au pair agency called Smartaupairs to enable her to work part-time and have the flexibility to be there for her boys, now aged 9 and 12, as they entered their teenage years. One-third of the families she has on her books have teenage children. They employ au pairs – young women from Europe and America – to live in the home and act as big sisters, role models, homework helpers and a “taxi service” when their parents can’t be around fulltime.

“It would never be voiced but you know in the corporate world if you make the decision as a mum to go part-time or ask for flexibility, it can affect your career. You know the employer will say ‘Oh well, there will be someone else to step into that position to do everything we want’.

I had to make a big decision to go part-time and for women who do that I think they deserve a pat on the back for that bravery.

Not everyone is in the situation where they can start their own business but you have to respect that other people want the flexibility you have. I’m proud that amongst the entire team I employ, not a single person works nine to five, five days a week. I employ several part-timers, including one mum who works some of the time from home. We all have a life outside work. Having that flexibility to work part time creates so much more happiness and fulfilment.”

Working parents are hiring au pairs and nannies in record numbers to cope with their busy lifestyles.

Agencies which link in-home carers with families say the demand is also being driven by long childcare waiting lists, fly-in fly-out dads in need of 24/7 help and more foreign women using au pair work as a way to travel around Australia.

Au pairs are live-in carers who often come to Australia on working visas, while nannies live elsewhere. Both care for children in the family home.

Last year, the Age newspaper in Melbourne featured an article about au pairs also! Families go in-house for a pair of helping hands

”My au pairs have been an absolute godsend. I pay Stefanie $7 an hour on top of board and she does 29 hours a week for me.”

”Not everybody works from nine to five and yet childcare seems to predominantly cater to a nine-to-five workforce,” she says. For lawyer Nicole Spicer, who works full-time, au pairs have provided the kind of flexible and convenient care she and her husband, also a lawyer, needed for their two youngest children, Anika, 9, and Daniel, 5.

Early Childhood Australia chief executive Pam Cahir says parents opting to have au pairs, who do not require any formal qualifications, should be vigilant when it comes to choosing an employee.

”Au pairs are a very legitimate choice for parents. At the same time, caring for children isn’t a job for just anybody off the street. Parents need to be really thorough in terms of looking at these people’s qualifications and references and making sure they have had the appropriate police checks,” Ms Cahir says.

Au pairs in Australia are really gaining momentum and we are very proud to be at the heart of it!

My name is Fabienne, I’m 22 years old, I’m from Germany and the new intern at Smartaupairs Australia. 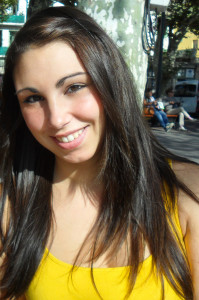 As part of my studies, “Foreign Languages in Economics and Administration”, I already did a 5 month internship in Spain and right now, I can’t wait to start this second internship in Australia.

Besides German, I speak English, have a good command of Spanish and know some French.

At Smartaupairs I will be the first point of contact for the Au Pairs from Germany. I will answer their questions, help them to solve problems and I will be a friend if they need someone to talk.
All in one, I will help them having an awesome time here in Australia.

In my free time I would love to travel through Australia, explore new places, meet new people and just enjoy my stay.

We have 100+ Au Pairs waiting to be placed! Are you living in Canberra,…

Au Pairs are coming back!

After many months of 'crossed fingers', we are delighted that au pairs will be returning to Australia…

All our latest news

Our awards and accreditations

Questions About the Smart Sistering Program

I Would Like to Apply For the
Smart Sistering Program

Please fill out this quick checklist. We want to make sure we can help you find a family in Australia! You can email us any time if you have any questions.

Apply to be a Nanny
in London?

Simply click on: Get me to the UK!
and check your mailbox and junk mail.

Apply for Au Pair
in Australia?

Simply click to Get me to Australia!
and check your mailbox and junk mail.

ONLY the countries listed can apply